As of 4AM, no severe weather alerts are in effect for the KXAN viewing area.

Below is a list of resources and live updates throughout the night.

The Austin Fire Department says crews fought one structure fire during the storm. Lightning struck a home in northwest Austin around 11:45 p.m. Tuesday. No one was hurt in the fire on Image Cove which is near Jester Boulevard. Austin Fire says one adult and two children were displaced by the fire.

Austin Police and Department of Public Safety report no major issues with the storm. A dispatcher with the Travis County Sheriff’s Office tells KXAN she got five calls from “all over the county” of fallen trees.

Severe thunderstorm watch has been discontinued for the Austin Metro counties, but continues for our eastern counties until 3 a.m. (Fayette County until 5 a.m.) 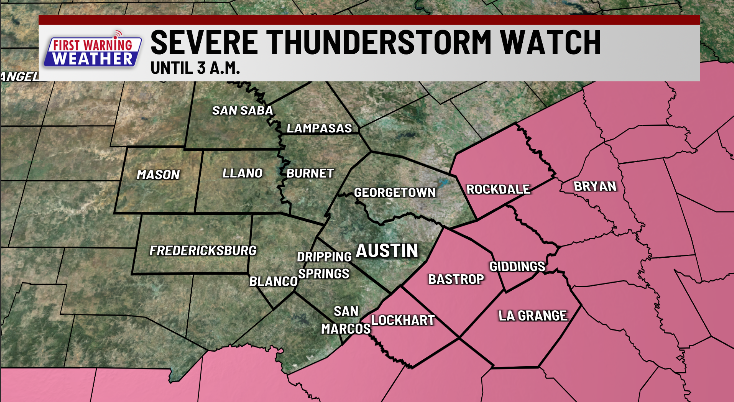 This video from Round Rock is pretty crazy. A viewer was driving down the street when storms were blowing through the area and the power just goes out. Street lights, traffic lights, everything goes black.

The severe storms should be out of the area around 1:30 a.m., according to the First Warning Weather Team.

Austin Energy is reporting more than 21,000 customers are without power all over Austin as the storms blow through. Most of the outages are in central, north and northwest Austin, according to the outage map.

More than 3,300 Pedernales Electric Cooperative customers are without power, according to PEC’s outage map. There are nearly 2,500 PEC customers in Travis County without power, and more than 1,000 in Hays County.

The storms are moving through Austin now. Find shelter in a sturdy building. A report from Camp Mabry had a wind gust of 50 mph. We have received reports of pea-sized hail from various parts of Austin.

A Severe Thunderstorm Warning has now been issued for Travis, Williamson, Hays, Blanco and Burnet counties until 11:30 p.m. There are 70 mph winds and quarter-sized hail possible, according to the National Weather Service.

The entire Austin metro area is at an enhanced risk of severe storms, 3 out of 5 on the Storm Prediction Center’s scale, with an elevated risk of large hail. Storms are moving in from west and northwest into Williamson County and are approaching the Round Rock area.

Sign up for our daily forecast newsletter at kxan.com/newsletters. Download the KXAN Weather app to get the latest weather forecast: Apple | Android

Storms are starting to make their way into parts of the Hill Country with a report of hail near Lake Buchanan. KXAN’s First Warning Weather team is tracking the storms and said they could arrive between 10 p.m. and midnight.

“The State of Texas stands ready to offer robust assistance and provide rescue efforts to those affected by severe weather in the coming days,” Abbott said. “It is important for Texans to be prepared for the severe weather and stay alert through their community warning system to protect their property and ensure the safety of themselves and their loved ones.”

7 -Day and Hourly for Category

Post-Roe, other cases could be revisited

Free school meals for all set to end, what does it …

Texas aiming to move state to ‘Next Generation 911’

What is the best cold press juicer?

Everything You Need To Know About Prime Day

Post-Roe, other cases could be revisited

Car break-ins at Bull Creek are on the rise

Tiny but dangerous — seek shelter during a microburst

Why you can’t swim in Lady Bird Lake

What happened to KXAN’s studio?