Skip to content
WATCH ANIMATION: From January 2019 to March 2022, more than 1,200 patients were sued in Williamson County civil courts for medical debt, filed on behalf of a Central Texas hospital mostly by one law firm. We are not naming those entities because this collection practice is legal. This data animation illustrates the number of suits filed on specific dates, highlighting the largest daily quantities, important points in some cases and key COVID-19 pandemic benchmarks. In an email, the hospital said, “None of the collection activity is related to COVID treatment or testing.” The box on the right shows the total number of suits filed in that time. (Source: Williamson County civil courts, Williamson County and Cities Health District, Texas Department of State Health Services)

AUSTIN (KXAN) — Our investigation into medical debt lawsuits began when an email landed in our inbox last year. The tip referenced a civil court in Williamson County with a large number of lawsuits aiming to collect unpaid medical bills.

The tip offered a good starting point, leading us to discover a Central Texas hospital – and a law firm working on its behalf – behind hundreds of those suits. We wanted to know: how were people in Central Texas being affected by these cases?

Using online court databases, we discovered almost all the hospital’s cases were filed in one court – Williamson County Justice of the Peace Precinct 2. In 2020, the hospital’s cases accounted for over 70% of all small claims lawsuits in that court, according to records provided by court administration.

We didn’t find the hospital engaged in any illegal practice or process. Under current Texas law, the hospital is within its right to sue former patients for medical debt.

To find patients and hear their experiences, we started calling people named in lawsuits, but we quickly realized we needed a more personal, less alarming approach to encourage patients to speak with us and fully explain our project. We opted for a letter-writing campaign. 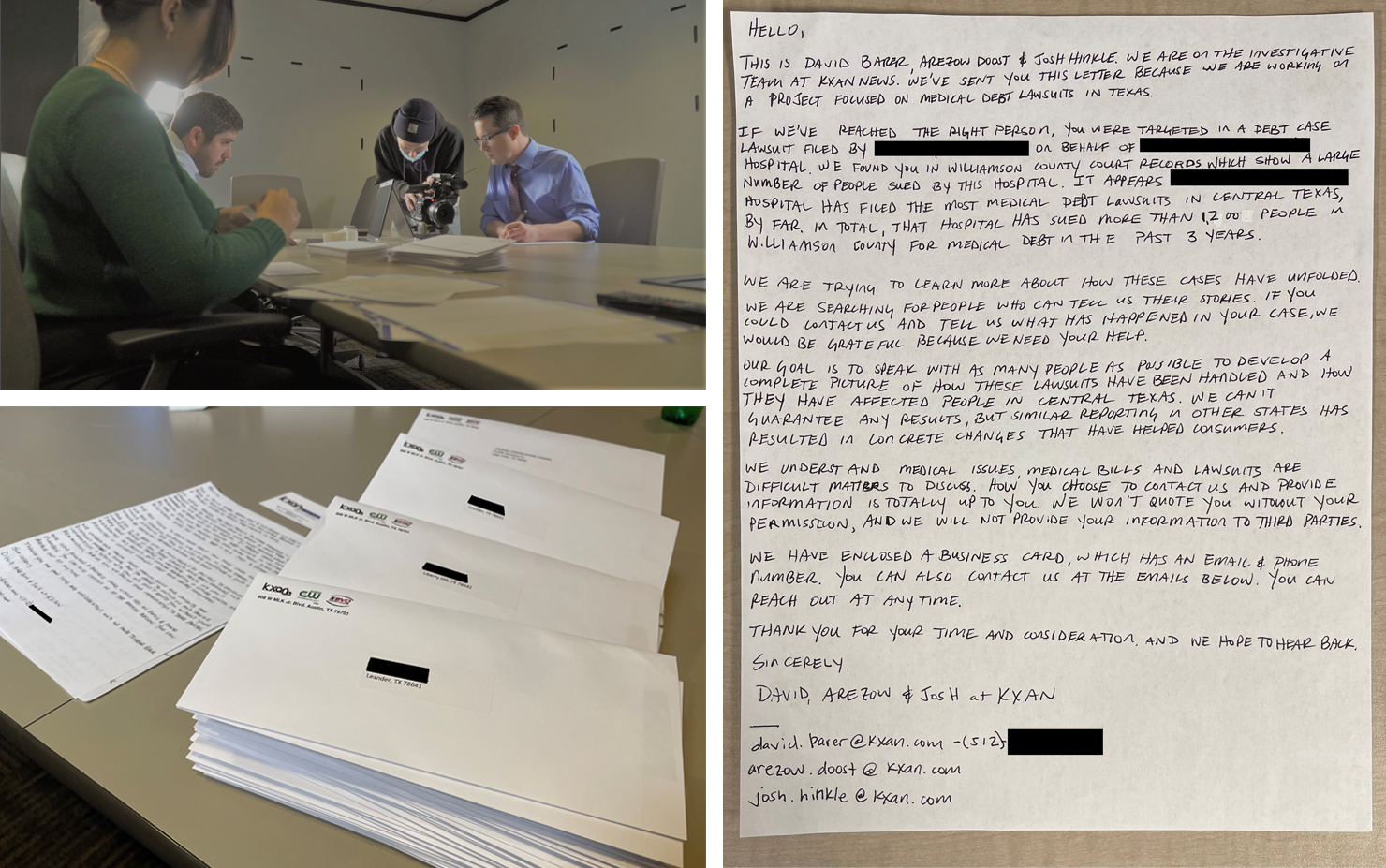 CLICKTAP IMAGES TO ENLARGE: KXAN mailed hundreds of handwritten letters to patients sued by a Central Texas hospital, asking them to respond for interviews in this project. (KXAN Photos/Josh Hinkle & Patrick Mullen)

Rather than send letters to all 1,271 defendants who were sued between June 2019 and March 2022, we whittled down the number of recipients to about 200. To do that, we grouped all the cases by year and then by their disposition. The groups included cases ended with an agreed judgement, cases concluded by a non-suit, cases disposed by default judgement, a few cases that went to trial and cases still pending in court. From each group and each year, we randomly chose a dozen in the hope of gaining wide understanding of the financial and personal impact the suits had on defendants. 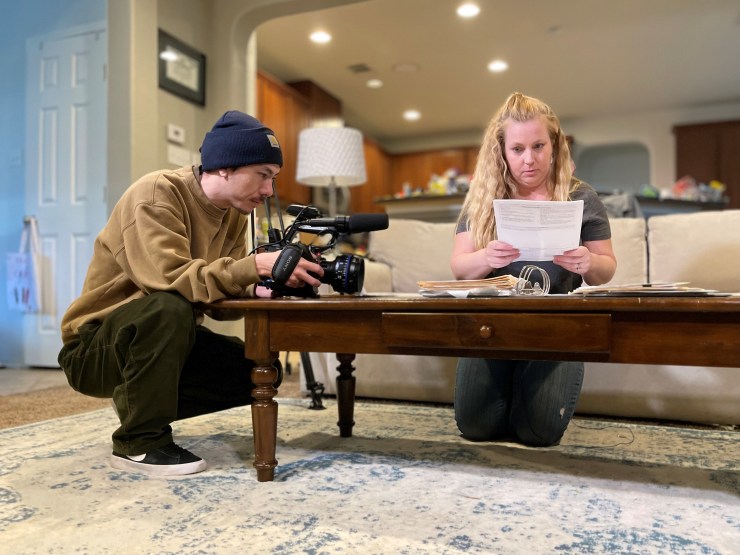 We handwrote one letter, copied it, printed mailing labels using addresses from court records and stuffed more than 200 envelopes. Within days of mailing the letters, the responses started coming back. Some people emailed, others called. Roughly two dozen letters were undeliverable. Within two weeks, we heard back from nearly 20 people sued by the hospital. We followed up by phone, email and in on-camera interviews. Each person we heard from had a unique story and circumstance. 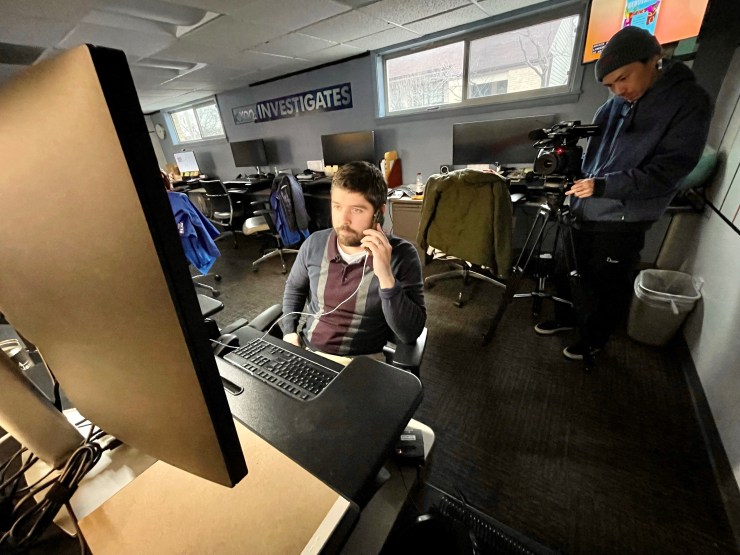 In nearly every court case KXAN examined, the hospital used the same law firm to handle the litigation. That firm declined to respond to questions and said it would not comment on any matters relating to any clients.

The hospital and its parent company also declined to participate in an interview with KXAN. The hospital did provide a statement by email, but it would not answer our detailed questions about its collection practices. And it would not discuss specific patients due to medical privacy laws, according to correspondence with a hospital spokesperson.

We wanted to know: do the lawsuits extend beyond this hospital? 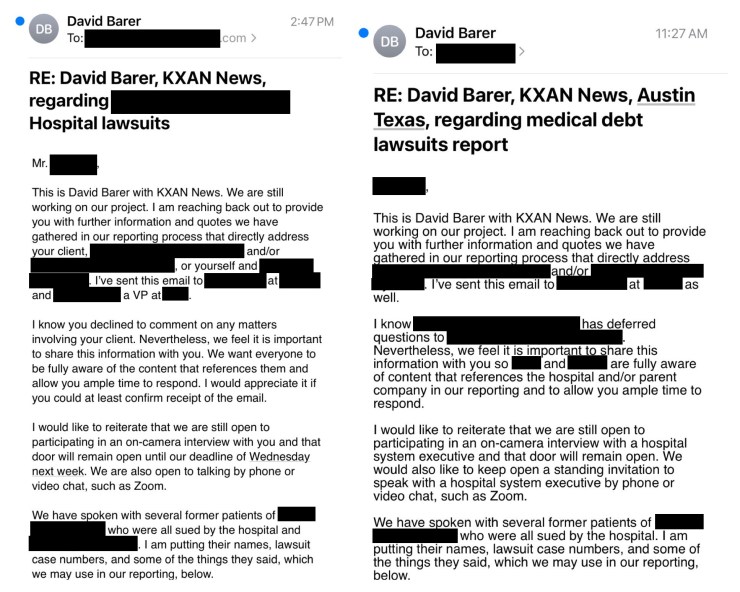 We focused our efforts on Travis, Williamson, Hays and Bastrop Counties surrounding the Austin area. Those counties are some of the most populous counties in Central Texas, and they have comprehensive and searchable online court databases. We used the American Hospital Directory to find all the hospitals in those counties and searched for possible lawsuits.

Aside from the first hospital we looked at, our searches turned up few other lawsuits filed by hospitals in their names against patients for medical debt in the same timeframe. 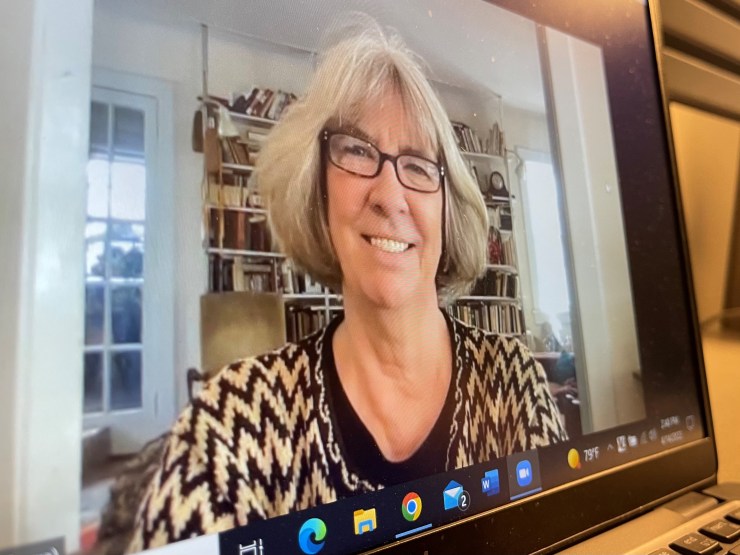 ClearHealthCosts founder and CEO Jeanne Pinder, a New York-based journalist, speaks with KXAN for a “Catalyst” podcast episode, part of the collaboration between the two outlets on this project (KXAN Photo/Josh Hinkle)

Pinder discovered it may be nearly impossible to accurately identify and count every medical debt lawsuit.

Finding cases filed by that one hospital was relatively easy because it is named as the plaintiff in the cases. The hospital doesn’t appear to sell its debt to a third party, but other hospitals might be doing that. Once a third-party debt collector buys and owns medical debt, it may file a lawsuit to collect under its own name. That means the debt collection company would be the plaintiff in the lawsuit, not the hospital. A researcher would have to obtain the original petition in every case filed by a debt collection company to see if the original creditor is named.

For perspective, there are nearly 2,400 companies registered with the Secretary of State’s Office that engage in debt collection in Texas.

GET HELP: What to do if your hospital sues you for medical debt

We also harnessed the power of social media in a crowdsourcing campaign. We put out calls for information and experiences on Twitter and Facebook for anyone sued for medical debt to contact us and tell us their story. 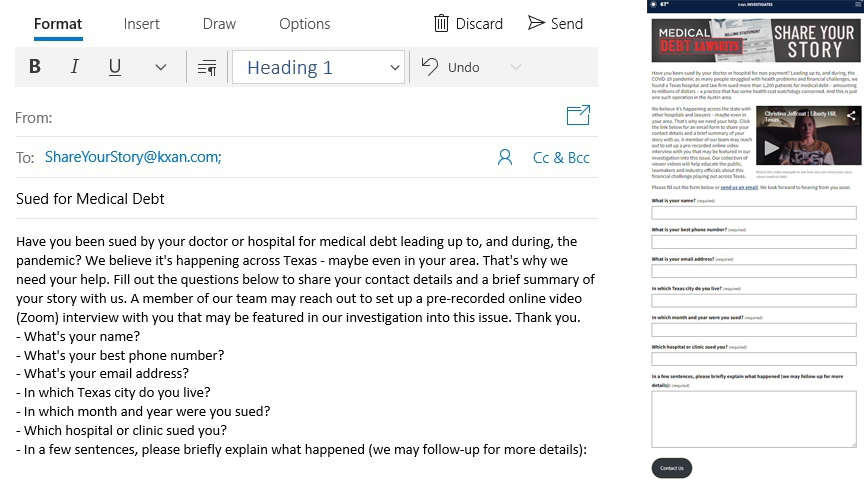 CLICKTAP IMAGES TO ENLARGE: KXAN crowdsourced across Texas for patients sued by doctors or hospitals. Our team asked people to “Share Your Story” through an online form, email questionnaire or responding to handwritten letters. After screening and verifying submissions with court records, we conducted interviews in-person or via Zoom, now featured in this interactive video gallery. (KXAN Screen Shots/Robert Sims)

We also spoke with medical billing experts, like Doug Aldeen, who said the government does little to nothing about concerns over medical debt collection – specifically, complaints made under the Texas Debt Collection Act. Aldeen, a healthcare attorney in Austin, described the medical billing and debt industry as “out of control” and the government as “asleep at the wheel” when it comes to oversight and enforcement of the law.

“The hospitals pretty much do what they want to do,” Aldeen told KXAN. “There’s no referee. The biggest problem we have in healthcare is there’s no oversight of a hospital. There’s nobody looking over their shoulder… There’s just not.” 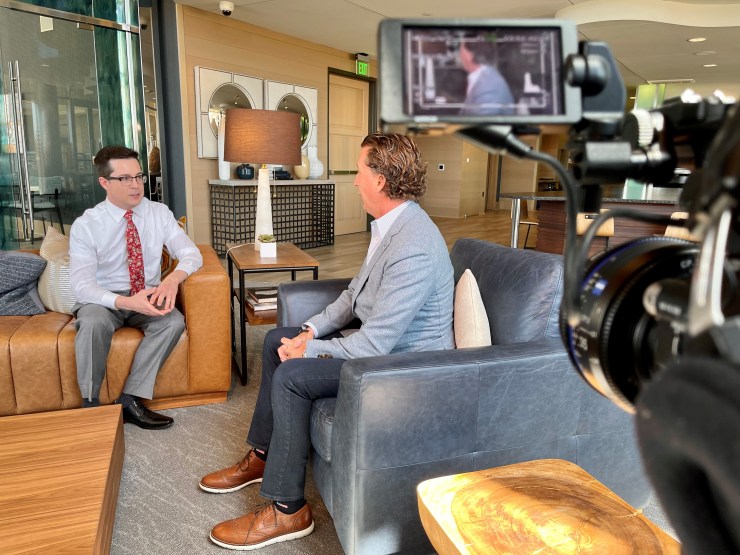 The Office of Texas Attorney General Ken Paxton has authority to enforce the Act, so we checked whether that’s happening.

To fulfill our request for complaints, Paxton’s office provided 156 individual spreadsheets, each with an average of about 30 complaints. Many of the spreadsheets were not uniform, so we had to individually load each one into a master sheet to build a database of more than 4,300 total complaints that could be analyzed using the database management language SQL.

Our analysis of all the complaints found 410 related to medical debt.

In the three plus years it took to receive more than 4,300 debt collection complaints, Paxton’s office took just one enforcement action, and it was not related to medical debt.

Paxton’s office declined our requests for an interview but did answer questions related to its debt collection act investigations by email. The office touted its success in enforcing other consumer protection laws, including netting millions in opioid manufacturer settlements.

The Debt Collection Act has been amended periodically, most recently by State Rep. Nicole Collier, D-Fort Worth. In 2019, Collier authored the “Fair Consumer Debt Collection Act,” a bill that prevents third-party debt collectors from going after debts that are past the statute of limitations. The bill also requires debt collectors to provide clear written notification if a debt is beyond the statute of limitations.

Collier said she is interested in further improving the Debt Collection Act if more problems are discovered. She said any debt collection practices that may cause people to shy away from seeking medical care are a problem and “the last thing we want to see happen.”

KXAN’s Arezow Doost and Richie Bowes and ClearHealthCosts’ Jeanne Pinder contributed to this report, which is part of the “Medical Debt Lawsuits” project.