App users, copy and paste this URL into a browser to see the interactives for this story:

A crisis is looming for some U.S. colleges, and not just because of the pandemic. KXAN teamed up with NBC News and the Hechinger Report to look at the financial strength of colleges and universities across the country. The good news: none in Central Texas had warning signs pre-pandemic, but KXAN investigator Erin Cargile has been tracking the impact to local colleges and universities that have been concerned about the potential of lower enrollment and loss of revenue. 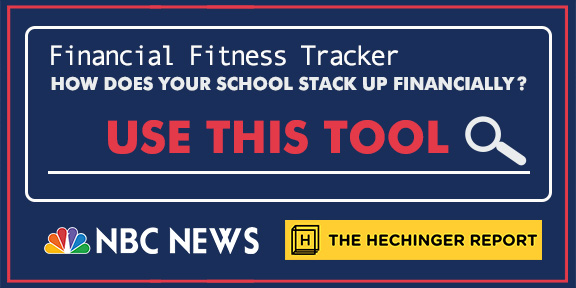 AUSTIN (KXAN) — Manthurs Oseni has been dreaming about becoming a Longhorn for years. He moved to Austin with his family after completing high school in his home country of Nigeria.

After knocking out the first two years of basic courses at Austin Community College, Oseni applied to the University of Texas at Austin in February, before the coronavirus pandemic changed everything.

Oseni was accepted to UT in May, while the university was still formulating a plan for what the unconventional fall semester may look like.

“With all of this happening now, it really threw me off,” said Oseni. “I was like, ‘Do I still transfer?’ I just decided to go with it, like it’s a challenge anyway.”

Instead of living on campus, Oseni decided to stay at home and take all virtual classes for the first semester. He will be one of thousands of Central Texas college students earning their degrees online.

It is still a mystery how fall enrollment at UT Austin will compare to last year, when more than 51,000 were enrolled. The university told KXAN it will not disclose the numbers until day 12 of classes, but leaders say half of students are opting for a fully online schedule.

On-campus housing will be far from capacity. Out of 7,300 open spots, a total of 4,500 students have committed to living on campus. Students who choose to learn from home both semesters, rent-free are saving more than $12,000 on room and board, which is money the university is not getting.

Crisis looming for some US colleges

Though Central Texas’ universities appear strong enough to handle the pandemic’s negative impacts, there is a crisis looming for some U.S. colleges.

NBC News and The Hechinger Report have been studying the financial strength of colleges and universities across the country. More than 500 showed warning signs of financial stress in at least two of the areas analyzed, including a pattern of declining enrollment.

Over the summer, UT Austin officials said they were considering layoffs due to declines in future revenues and uncertainty surrounding the pandemic. However, in a recent virtual press conference, Interim President Jay Hartzell only said there have been some furloughs in departments, such as performing arts, that have not been able to carry out normal revenue-generating operations during the pandemic.

In a recent St. Edward’s student survey, which does not include incoming freshmen, 74% of students said they plan to return to campus, 24% have decided to be all virtual off-campus and just 2% said they were planning to postpone their education altogether.

Manier oversees admissions and says the university has continued to think outside the box on recruiting efforts by offering virtual campus tours, one-on-one orientation Zoom calls with new students and posting brand new podcasts from professors on its website explaining what to expect in the middle of the unexpected.

“We want [students] to continue to thrive during the pandemic,” said Manier. “It’s not enough for us to opt out of life for six months, eight months, a year — however long this will last.”

Some education experts have predicted community colleges could come out of the pandemic in better shape than traditional four-year universities, and become a more popular choice this fall during the global pandemic and economic slowdown because it provides two things: the option to stay home and the chance to save money. Recruiting efforts haven’t slowed down for ACC, which has just moved to virtual formats and targeted television commercials.

Hellums plans to finish her associate’s degree at ACC this school year and pay about $2,500 instead of more $10,000 at a four-year state school.

ACC isn’t sharing fall enrollment numbers just yet, but according to information the college released they fared well over the last three months during the pandemic: summer enrollment surpassed last summer.

“I think what happened was families just had time to reflect at home and decide, ‘How do I, what do we do with this time that we have?'” said David Zuniga, ACC’s director of student recruitment services.

Zuniga said students typically make their fall school decision in July, but this year he noticed many students pushing it off until August to wait and see how four-year universities were going to handle the semester.

Most local colleges and universities tell KXAN they will release enrollment numbers after the first few weeks of class.

We will be adding those numbers to the map below as we get them. Right now, you can scroll over local colleges and universities on the map to see the fall 2020 outlook information we’ve gathered for each one.

KXAN has mapped out Central Texas colleges and universities. Scroll over each one to find out what they’re expecting for the fall 2020 semester.

This town of 600 is the new center of U.S. population

No. 1 Horns stay perfect after win over TTU

$1M in federal funds awarded to Round Rock crisis …

Ad legend Dan Wieden, who coined ‘Just Do It,’ dies

This town of 600 is the new center of U.S. population

No. 1 Horns stay perfect after win over TTU

$1M in federal funds awarded to Round Rock crisis …

More clouds, but still cool the next few mornings

One dead after vehicle collision on N Lamar

4 Texas debate moments everyone will be talking about

How will Austin nonprofits use Project Connect funds?

In 1956, Horns and Mounties battled to 1-point game

State of Texas: Swayed by the message – voters react in …

State of Texas: Guns and the Grid

Governor Debate wrap-up: How the candidates would …

Don’t wait until Prime Early Access Sale to get these …

Life-changing gadgets you can get ahead of Prime …

12 spooky products you can buy now to make this Halloween …

More clouds, but still cool the next few mornings

One dead after vehicle collision on N Lamar

The Refuge: No grand jury indictment for employees

Austin catching up to San Francisco, other tech hubs

Why customers say Austin Whataburgers are the worst